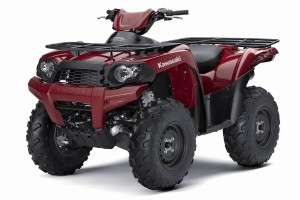 The 2010 Kawasaki Brute Force 750 4x4i is built for speed, with plenty of power to send you soaring across the frozen tundra, whether you're joyriding or need to haul equipment to your cabin in the woods.[/caption]

I know a lot of folks who pack up their ATVs when the weather turns cold, but not everyone is scared off by a bit of ice and snow. Most ATVs are well equipped for winter weather, but if you're looking to buy a used model this season, you might want to check out the 2010 Kawasaki Brute Force 750 4x4i. This ride is built for speed, with plenty of power to send you soaring across the frozen tundra, whether you're joyriding or need to haul equipment to your cabin in the woods.

This Brute Force has a four-stroke V-twin engine with a 749cc displacement and a continuously variable belt-drive transmission for fluid gear transitions that provide a smooth ride. It doesn't hurt that the trails are likely to be far less crowded in winter, giving you the chance to really open the engine up and see what it can do. The ATV is also quite comfortable to ride on, so even when your fingers are numb and your hair is covered in icicles your rear end is still more than happy to stay out. You also have wide floorboards that can easily accommodate your snow boots and protect you from the stray branch that pops out of the snow.

When it comes to knowing your ride, the Brute Force 750 provides lots of important information. Not only does the dash digitally display information such as remaining fuel, trip meters and a clock, but there are a few exclusive controls as well. This includes the Variable Front Differential control, a yellow lever actuator that allows the rider to control exactly how much power is being distributed to the front axle. This is something you'll surely appreciate when your travels take you through the occasional slush puddle.

Another perk of this ATV is the independent rear suspension that allows for more travel in the rear wheels. This comes in especially handy when you're riding along a snow-covered trail and you encounter unexpected obstacles. The Brute Force will have no problem crawling over even the larger rocky patches and branches that stand in the way. Plus, with adjustable front and rear suspensions, you will hardly even feel the bumps as you cruise around the trails this winter.