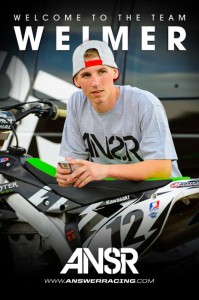 and Jake Weimer, announced that the two parties have reached a two-year agreement for Jake Weimer to use and endorse ANSWER RACING apparel starting in the 2013 racing season.

Weimer, who finished 3rd overall in the 2012 AMA National Motocross series, was thrilled about his big move to the Answer team.

"I am honestly thrilled to be on the ANSR program. I am a big fan of the gear in both looks and functionality. I couldn't be happier with my new look. ANSR promotes individualism, and I am really excited to set myself apart from the rest of the field in my new ANSR gear" Weimer stated.

Answer Racing's Director David Casella is equally excited. "ANSR is an athlete driven brand and having an athlete of Jake's caliber onboard the team is awesome. I believe Jake has all the qualities that ANSR stands for and having him lead the charge for the brand shows ANSR's commitment to racing".
Look for Jake to be debuting the all-new ANSR "Elite" gear when the AMA Supercross series kicks off at Anaheim's Edison Field, January 5, 2013.

Answer Racing has been in the business of making quality motocross products since 1976.