Jerez Confirmed As A MotoGP Track Through 2015 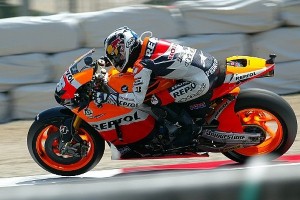 The Jerez de la Frontera circuit will be the home of the Grand Prix of Spain for the next three years, following an agreement between MotoGP's governing body, Dorna Sports, and the Spanish government.

The track is one of the most consistently popular sites on the motorsports schedule, drawing in upwards of 200,000 fans for the main races. The success of riders like Jorge Lorenzo and Dani Pedrosa, who finished first and second in the 2012 MotoGP standings, respectively, has also helped to raise the visibility of racing in Spain.

"It's with great pleasure that I can announce the extension of the Jerez Grand Prix for a further three years," said Dorna chief executive Carmelo Ezpeleta. "It is one of the key stops on the MotoGP calendar, with an atmosphere bar none, that attracts huge crowds from near and afar. It is also a popular venue with the riders, as the track's nature makes it a great spectacle for some of the best racing in the world."

The upcoming season's event at Jerez, which will act as the third round of 2013, will take place May 5.