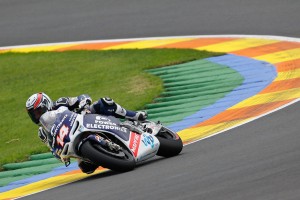 Suzuki was in talks with several riders earlier this year, even going so far as signing Randy de Puniet as a test rider.[/caption]

Suzuki pulled out of MotoGP racing at the end of 2011, but the manufacturer recently expressed interest in returning to the motorsports series. The Japanese brand, which ended its relationship with MotoGP for financial reasons, has asked to test with the series throughout 2013, setting up for a 2014 comeback.

The company has maintained its presence in the world of off-road racing despite its financial troubles, and is also working on a 1,000cc MotoGP project to improve its competitiveness in the series. Suzuki previously won the class title in 2000 but only brought in one event win since 2002.

"They are asking us to have some testing during the 2013 season and if everything goes well maybe we will see them in 2014," Carmelo Ezpeleta, chief executive of MotoGP's governing body Dorna, told BBC Sport. "The main thing is to have more competitive races. If we can do that with more manufacturers than all the better, but having competitive bikes is the key."

Suzuki was in talks with several riders earlier this year, even going so far as signing Randy de Puniet as a test rider, and has drawn interest from big names such as Cal Crutchlow, Crash.net reports.