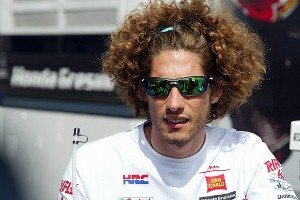 A gallery dedicated to the late MotoGP racer Marco Simoncelli opened December 8 in his hometown of Coriano, Italy. Organized by his family and friends, the displays honor the memory of the fallen rider just over a year after his death.

"The SIC History" gallery is located inside a building known as the "Palace of Culture," with rooms dedicated to memorable moments from Simoncelli's motorsports career. Visitors can get close to his sport bike helmets, gear, and overalls that have been arranged by Aldo Drudi, one of Simoncelli's friends and his helmet graphic designer.

The opening occurred on the same weekend as the inaugural Simoncelli Supermoto Day, also in Italy. Superbike riders like Valentino Rossi, Andrea Dovizioso and Max Biaggi all took part in the event at the Latina Circuit, along with many other familiar faces in the world of motorsports.

"It was an amazing event to be a part of," British rider Christian Iddon told Crash.net, after finishing second in the team race with his countryman Matt Winstanley. "I am extremely grateful to SHR for lending me the bike, and to the organizers for allowing me to take part."