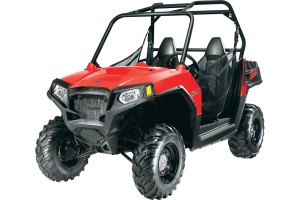 Polaris understood something many of us didn't - a smaller UTV with less displacement can be extremely useful.[/caption]

When Polaris first announced the new 2012 RZR 570 side-by-side UTV, it was met with a great deal of skepticism. The RZR line cornered the market in high-performance side-by-sides, so why even bother introducing a less powerful model? Well, Polaris understood something many of us didn't - a smaller UTV with less displacement can be extremely useful. While I'm all for sheer power and performance, the 570's big brother, the RZR 800 I own is often too big to get where you want to go. The 570 on the other hand, has a smaller chassis, making it much easier to negotiate narrow trails and obstacles that stand in its way.

Polaris gave the new ride a 567cc, dual overhead cam, single-cylinder engine that has all the qualifications to fit on a single-rider ATV, which was the reason so many were hesitant to accept the 570. However, when this engine gets going, it's easy to forget the meager size and focus all your energy on enjoying the experience of exploring the wilderness. It helps that the engine is paired with a high-efficiency transmission system and a clutch system that makes it easy to keep the RPMs up.

One of the best features of this bike is the air intake, which may sound like a strange choice as a highlighted feature, but the Polaris design team situated the intake high up on the body. If you've ever driven through mud or water and gotten anything but air in this valve, you know how much of a hassle it can be. The RZR 570's air intake valve all but eliminates that threat, giving you tons of freedom to get as muddy as you want without the threat of harming your engine with dirt and debris.

I took my wife with me when I test drove the 570, and she can be kind of a nervous passenger even though she's just as wild as me when she's behind the wheel. The passenger grab bar kept her calm during our ride, even though she wasn't too prepared for the bumpy, obstacle-filled trail we took the UTV down. Our RZR 800s are too big to make it down paths like this, so I had a blast, and she said the grab bar kept her from bailing out along the way.