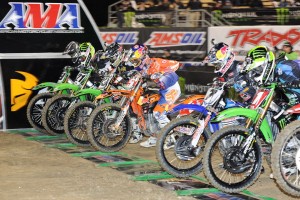 AMA Supercross was scheduled to race at Dodger Stadium when the series visits Los Angeles, but ongoing renovations have forced the race to move - Photo: Hoppenworld.com[/caption]

AMA Supercross was scheduled to host the Monster Energy Supercross race at Dodger Stadium on January 19, when the motorsports series visits Los Angeles, but ongoing renovations have forced the race to move. The event will instead be held at Angel Stadium in Anaheim, California.

Off-season improvements have taken over at Dodger Stadium, where a new ownership group made renovating the venue one of its priorities. The 50-year-old stadium was not originally supposed to be receiving such extensive updates, forcing race officials to change host sites at the last minute.

"We are working diligently to make the change from Dodger Stadium to Angel Stadium for the January 19 Monster Energy Supercross race seamless for the teams, sponsors and most importantly the fans," said Ken Hudgens, the chief operating officer of Field Motorsports, which promotes the event. "The collective effort between the Monster Energy Supercross staff, Dodger Stadium staff and Angel Stadium staff to make this venue change has been very positive."

Angel Stadium hosted multiple AMA Supercross rounds in the years leading up to 2011, when Los Angeles was added as an alternate California location. It is already the site of two other races this year, beginning with the 2013 season opener on January 5 and another event taking place on February 2.