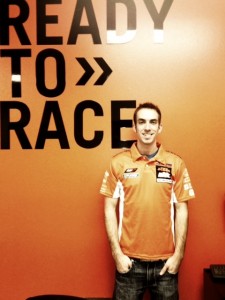 Taylor Knapp signed as the second rider aboard the KTM/HMC Superbike Racing Team.[/caption]

KTM Motorsports is excited to announce the signing of Taylor Knapp as the second rider aboard the KTM/HMC Superbike Racing Team to compete in the AMA Pro SuperBike Racing Series for the 2013 season.

"The first thing I noticed about Taylor is that he has a very strong work ethic," stated Hansen. "I feel he and Chris will push each other each time they train together which will help them both progress throughout the season. He is a young and aggressive rider, just like Chris, and I feel together they will create a solid team.

Knapp has been racing professionally since the age of sixteen where he began his start in the 600cc classes. He moved up and raced in the Sport Bike classes and in 2009 officially began racing full-time in the AMA Pro SuperBike class. Knapp's career best finish was a 4th place result at the 2012 New Jersey Motorsports Park round which nabbed the attention of Hansen.

"I am very excited to be given the opportunity to race for the KTM/HMC Superbike Team," commented Knapp. "I have been very interested in the progress of the team since I first saw the RC8 at a race two years ago. I have had success on twin motorcycles in the past and am looking forward to racing the KTM this coming season. I am very happy to have caught Mitch's attention and to be given this opportunity to show the team what I am capable of."

Look for Knapp and teammate Chris Fillmore during their first event together at the opening round of the AMA Pro SuperBike Series at Daytona International Speedway on March 14-16, 2013.