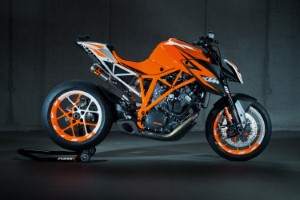 The American Motorcycle Association (AMA) named Jon-Erik Burleson the Motorcyclist of the Year. Burleson, president of KTM North America, was recognized for his positive impact on the motorsports community over the last 12 months.

Burleson took over KTM North America in 2005, replacing AMA Hall of Famer Rod Bush. Under his supervision, the company moved from a smaller-scale European manufacturer to one of the premium off-road brands in the world.

"Through his professional success and his volunteer efforts, Jon-Erik Burleson's commitment and influence make him one of motorcycling's most effective advocates today," said AMA president Rob Dingman. "That, paired with his professional success leading KTM North America through and beyond the recent economic recession, makes him an obvious choice for the 2012 AMA Motorcyclist of the Year."

KTM has seen tremendous success in recent years, both on the racetrack and on the streets. Sales of bikes and dirt bike accessories for the company have increased by nearly 20 percent over the past four years, despite recent downward trends across the industry. The company's factory racing team also won its first title when Ryan Dungey grabbed the AMA Pro Racing National Motocross Championship.

Burleson's contributions will be outlined in the January 2013 edition of AMA's American Motorcyclist magazine, Motorcycle.com reports.