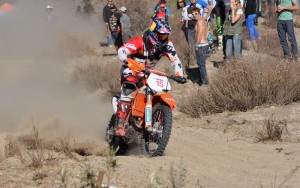 In his first race as a member of the Factory FMF/KTM Team, Ivan Ramirez won the Tecate HareScramble accomplishing a dream he had hoped for since a young kid - Photo: Neena Gordon[/caption]

In his first race as a member of the Factory FMF/KTM Team, Ivan Ramirez won the Tecate HareScramble accomplishing a dream he had hoped for since a young kid.

Ramirez, a native of Mexico, had high hopes of winning the Tecate HareScramble since he was a young rider attending the races with his family on 80cc machines. Ramirez has raced the event for the past five years with a career best finish of 4th place before lining the start straight for the 2012 event.

Ramirez launched off the line aboard his KTM 350 XC-F to take the early holeshot. He led the entire two hour race which consisted of two 22 mile laps from start to finish. "I am very excited to take the win at this race in front of my family, friends and fans," remarked Ramirez. "I choose the 350cc bike because it was a little smaller than my normal race bike and I knew the course would be tight. I was right, and the bike worked perfectly."

The race marked the start to what will hopefully be a successful season for the young Mexican rider. Ramirez was just announced as a member of the Factory FMF/KTM Team one week ago and will compete full-time in the Hare & Hound and SCORE/Baja Series.

Team Manager, Antti Kallonen, commented, "We have put a lot of effort into Ivan's training to transition him to the highest level of competition, not only in baja-style racing, but in any offroad racing element. The Tecate race was much tighter than he was used to racing and he proved that his training is paying off. The development he has achieved in his riding skills and the intensity at which he can ride his race pace has improved and we are very proud of him for this win."