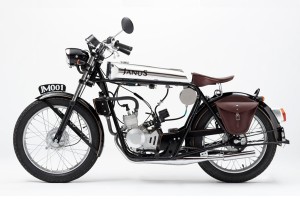 A brand new design from the motorcycle company Janus is channeling the style of bikes from the 1920s.[/caption]

A brand new design from the motorcycle company Janus is channeling the style of bikes from the 1920s. While the motorcycles look like they might be classics simply given a makeover, they all are new models with some distinctive features borrowed from antique machines.

According to AutoBlog, the manufacturer's founders, Devin Biek and Richard Worsham, got the idea for the retro rides thanks to inspiration from some of their own favorite antique bikes. They also saw how many riders were customizing their motorcycles while staying on a budget.

The resulting bike has a six-speed transmission that tops out at about 55 miles per hour, with an option for an upgraded engine that generates twice the horsepower. It also has a range of more than 180 miles on a full tank and can get 60 to 70 miles to the gallon. One of the most distinguishing features of the machine is its frame, which is handcrafted by Amish metal workers in Indiana and allows for 18-inch touring tires that are made for cruising.

Janus' hand-made, small-displacement bikes harken back to a different era of motorcycling, but the rides have a modern flair that will likely draw some attention on the roads from motorcycle enthusiasts.