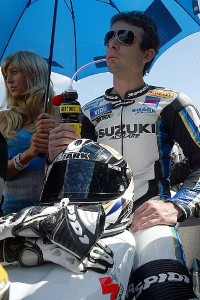 Aprilia Racing confirmed this week that Sylvain Guintoli will replace the retiring champion Max Biaggi on its 2013 motorsports team. Guintoli, who made his World Superbike debut in 2009, previously raced with Suzuki and Ducati teams and used an Aprilia bike in the 250 class from 2001 to 2006, Crash.net reports.

In his career, the Frenchman has accumulated three wins and 10 podium finishes, ending each year with a ranking in the top 10. He won three races in 2012 and ended the season at seventh place in the standings.

The 30-year-old rider will join Eugene Laverty on the Aprilia team, where they will race on the official RSV4.

"I am very happy, especially because the feeling with the RSV4 has been good right from the first few meters," said Guintoli. "To be able to sit in the saddle of the world champion bike is a great opportunity for me - one of the most important in my career."

Guintoli made an impression with Aprilia officials earlier in the week, turning in strong times at the Superbike test session on the Jerez track in Spain. There he had some of the fastest lap times, finishing only behind Kawasaki phenom Tom Sykes.