Motorcycle Maniac: 2012 Yamaha Super Ténéré Impresses On And Off The Road 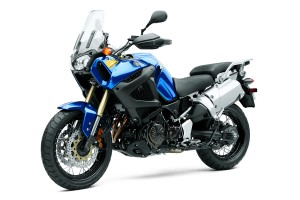 Yamaha released the 2012 Super TÃ©nÃ©rÃ© in Europe long before the bike came stateside, but it made its American debut over the summer.[/caption]

Yamaha released the 2012 Super TÃ©nÃ©rÃ© in Europe long before the bike came stateside, but it made its American debut over the summer. Of course, I had to try the bike out for myself, and I was pretty impressed, but there were quite a few weak points. The issues I noticed mainly involved aspects that are easily remedied by adding a few aftermarket street bike accessories, so I still approve of this adventure-touring motorcycle.

The Super TÃ©nÃ©rÃ© was inspired by Dakar Rally racing, and its parallel twin engine has a 270 degree uneven firing order, not unlike the Triumph America. The 1199cc motor provides plenty of power to move you along off-road surfaces easily, and it handles pretty smoothly on the pavement as well. Since the bike is designed for on- and off-road riding conditions, Yamaha slapped on a pair of knobby tires that really improved its off-road handling. However, the coarse tread did degrade the asphalt riding experience a bit. At least replacing tires is an easy fix if you plan to do a lot more road riding, and if you're more of an off-road rider, the pavement handling isn't so awful that you'd be miserable riding on the factory-issues tires.

The bike itself is a pretty interesting ride to look at. The front end is a bit bulkier than the rear, but with the addition of the optional Yamaha hard cases, you can get a bit of balance. You can opt for a top case, which in my opinion is a bit too large for the bike, or smaller, more discreet side cases. The company also recently introduced soft saddlebags if you don't enjoy to squared-off look of the hard cases. You can choose between a Raven black or Impact blue, a darker metallic shade, for the front panels.

If you have a friend or spouse who loves being a motorcycle passenger, you'll really like this ride. Most bikes handle completely differently when you add a second person, but the Super TÃ©nÃ©rÃ© accommodates two riders without pause. It has a small windscreen that not only protected me, but my buddy said he could feel the benefits from the back of the bike as well. No one likes to be choking for air, especially if they're trying to enjoy the experience of riding on the back of a bike.