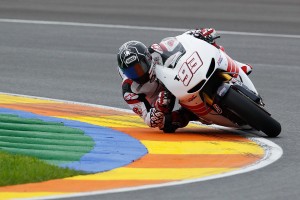 Marc Marquez, the reigning Moto2 World Champion, made his long-awaited debut in MotoGP with the Repsol Honda team in Valencia.[/caption]

Marc Marquez, the reigning Moto2 World Champion, made his long-awaited debut in MotoGP with the Repsol Honda team in Valencia. He was there with new teammate Dani Pedrosa to begin testing for the 2013 motorsports season, when he will make the move from Moto2 to MotoGP.

The rider was forced to wait to ride, as wet weather soaked the circuit and kept all racers off the track for most of the testing period. Once a dry line appeared, Marquez was able to ride the 2012 Honda bike, and his times at the track placed him as the seventh fastest of the day.

"I feel so happy," Marquez said. "In the beginning it was quite difficult but very nice to feel the power of the bike...I tried to adapt my riding style from Moto2 because there was quite a big difference. There are many things to improve and try...but the main thing is that we have had a good start and I have a very good feeling with the team."

The rider will be back on the track in Sepang from November 26 to 28, when he will get a chance to test the 2013 Honda prototype.