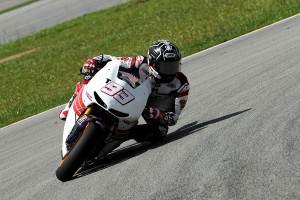 Marc Marquez ended the day with the fastest times, despite only having a limited number of laps on the Honda bike.[/caption]

Struggles with inclement weather continued for the MotoGP Honda team, which is in Sepang, Malaysia, for a three-day private test. A wet track early in the day hampered the start of their testing, but the weather held off long enough to allow the motorsports team to race several laps later in the afternoon.

Most of the attention was on Marc Marquez, the reigning Moto2 champion who is making the move to MotoGP for the 2013 season. He ended the day with the fastest times, and despite only having a limited number of laps on the Honda bike, his times on the Sepang track would have placed him in the top 10 qualifiers at the formal Malaysian Grand Prix that took place in October. The young rider had the opportunity to test the 2012 Honda motorcycle as well as the 2013 RC213V prototype.

"At the moment the weather is definitely not our friend..." said Marquez. "I am happy because I have been able to improve my lap each time I went out, even though I remained on the same tires. Let's hope that the weather will be kinder tomorrow and it won't rain."