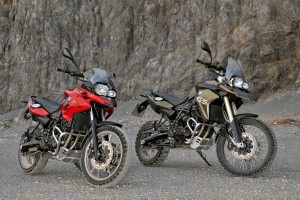 Riders from around the world kicked off a week of adventure riding on November 24 for the BMW Motorrad GS Trophy. All 45 participants are using identical BMW F800GS motorcycles for tests and challenges around the Patagonia region of South America as part of the third annual motorsports event.

The racers in this year's event represent 19 countries, including first-time competitors from Russia, France and various South American countries. Riders were put into 15 international teams of three and will have to work together in order to succeed on the unknown trails through Chile and Argentina, Ultimate Motorcycling reports.

"The GS Trophy is not a race," said Michael Trammer, chief organizer of the event. "Speed is never a relevant factor. But nevertheless the trophy is very challenging: participants have to get up early in the morning, they don't know which route profile and special tests are awaiting them during the day and they have to make long distances day by day."

Every bike is outfitted with protective motorcycle accessories from Touratech. The gear includes a skid plate, crash bars, hand guards and a headlight guard. While the BMW GS was already designed for off-roading, a few elements were added to make the bike better equipped to handle the South American landscape.