Fourth EnduroCross championship in a row for Blazusiak 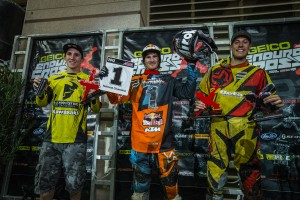 Taddy Blazusiak is the 2012 Champion, Cody Webb took second and Taylor Robert finished third, and showing he could be a threat for the title in upcoming years - Photo: Drew Ruiz[/caption]

KTM's Taddy Blazusiak won both main events at the final round of the 2012 GEICO AMA EnduroCross Series, presented by Lucas Oil. Blazusiak also clinched his fourth consecutive EnduroCross championship. Beta's Cody Webb did everything he could to take away at least one win by battling Blazusiak during both mains, leading several laps and finished second both times out. Mike Brown took third in the first main event and Kyle Redmond took third in the second main.

Colton Haaker won the first expert heat race with a last lap pass on Brown and both went to the main event. Webb dominated the second heat race and Redmond came back from several mistakes to take second and a spot in the main. Blazusiak won the third heat over Monster Kawasaki's Justin Soule. With the double main event format, the remaining riders move into two separate LCQ races. Taylor Robert won the first LCQ over Cory Graffunder and Jamie Lanza to earn spots in the main. Geoff Aaron won the second LCQ over his GEICO Honda teammate Kevin Rookstool and Beta's Max Gerston to take the last spots in the main event.

Blazusiak took the holeshot in the first main event and that usually means it is over but Webb has proven to have the pace to challenge him this year. Webb passed both Brown and Blazusiak on lap two and led two laps. The crowd was on their feet as the two riders swapped the lead a few time on lap five and Webb kept it close until the end of the race. Webb made a big mistake and went down on lap six to allow Blazusiak to secure a safe win. Brown held second for the first few laps but then fell to third, where he ultimately finished. Geoff Aaron had a strong ride to move from ninth on lap one all the way to fourth. Soule was fifth, Haaker sixth, Graffunder seventh, Redmond eighth, Max Gerston was ninth, Jamie Lanza, Kevin Rookstool was eleventh. Taylor Robert crashed on the first lap and was credited with twelfth. 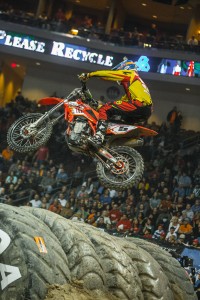 Cody Webb made a banzai run through the rocks on the last lap to try to blitz past Blazusiak - Photo: Drew Ruiz[/caption]

The second main event was again a great battle between Blazusiak and Webb. Although Webb did not lead a lap, he did challenge Blazusiak and edged ahead of him in the extremely difficult rock section a few times and made a banzai run through the rocks on the last lap to try to blitz past him. Webb lost control and went down hard but remounted to finish second. Husqvarna's Redmond had a great battle with Geoff Aaron for the final podium spot and the two riders banged bars on more than on occasion. Redmond ultimately took the position and Aaron held on for his second forth of the night. Brown got fifth, Soule was sixth, Graffunder was seventh, Robert eighth, Gerston ninth, Rookstook tenth, Haaker was eleventh and Lanza finished twelfth.

Blazusiak took his fourth GEICO AMA EnduroCross Championship for KTM. Webb took over second in the championship with his strong night. Robert finished third and showed that he could be a threat for the title in upcoming years.

The MAVtv Junior championship was taken by Beta's Max Gerston. It came down to a thrilling battle between Gerston, Ryan Sandoval and Bryan Roper fighting for the last spot into the main event in the LCQ. Roper had come into the race with a slim lead but a mechanical failure took him out of the race. Gerston ultimately made the main and his ninth place finishes in each race was enough to take the lead for the battle for riders twenty one and under. 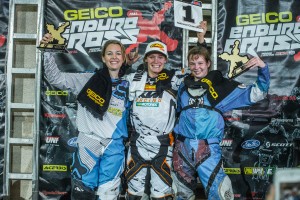 The first ever Women's class championship came down to the final race with KTM's Maria Forsberg taking the win - Photo: Drew Ruiz[/caption]

The First ever Women's class championship came down to the final race with KTM's Maria Forsberg holding a 10 point lead over US Women's Trials champion, Louise Forsley. Forsley lead the race on the last lap but got hopelessly stuck in the rocks and Forsberg took the lead and win, which also secured the championship. Forsley recovered for second in the race and championship. Rachel Gutish finished took the final podium position in Vegas. Chantelle Bykerk finished fourth in the race, which was enough to take third in the championship.

For the support classes, the Las Vegas final serves at the AMA EnduroCross Grand Championship with a #1 plate awarded to the winner of each class. In the Vet 35+ Class Kurt Nicoll defended his title with the win over Jason Gitchel and Rob Farrington. Keith Curtis won the Open Amateur class with a last lap pass in the rocks. Ben Rego was second and Ty Tremaine was third. The TrialsCross class was won by Phil Smage over Eric Storz and Ty Tremaine.

Gary Sutherlin was among the riders that missed qualifying for the expert main event but got to go to the Baja Designs night race and the $500 bonus that came with it. 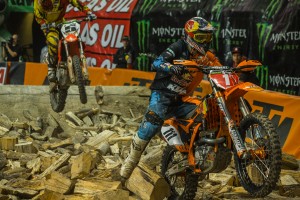 Blazusiak turned the fastest lap in the afternoon hot laps to earn first gate pick in his heat. He was placed in the third heat where he took the holeshot and led every lap to easily transfer into the main event. His teammate, Factory FMF/KTM rider Mike Brown, finished 2nd in his heat to also earn a top gate pick in the first main event.

When the gate dropped for the first main event it was Blazusiak and Brown out front early. The KTM riders led the pack for the first two laps before Brown made a mistake and dropped to 3rd. On the third lap Blazusiak got stuck in the rocks which gave Cody Webb an opportunity to pass for the lead. Blazusiak and Webb continued to battle for the next four laps swapping the lead each time through the rocks. With two laps to go, Blazusiak was able to pull a small gap as he led the way out front. Blazusiak's mistake-free ending to the first main event helped him earn the victory and clinch his 2012 AMA EnduroCross Championship. Brown would join Blazusiak on the podium with a 3rd place finish. 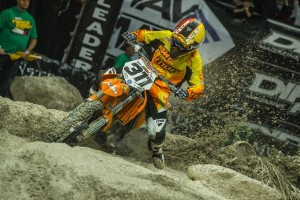 Out front, Blazusiak had a bobble in the rocks that allowed Webb to close the gap. Despite heavy pressure from Webb, Blazusiak did not buckle and continued to keep his KTM machine in the lead. The racing remained close and the battles kept the crowd on the edge of their seats as the race came down to the final rock section. Blazusiak found a clear line and smoothly raced through the rocks to go on to win the second main event of the night. Brown was able to successfully climb from his poor start into the top five to finish 5th overall. Brown's results in the Vegas finale helped him move to 4th overall in the championship point standings.

"It was great to have Taddy return to defend his championship this year. We are happy he was able to clinch another championship. He and the team have worked very hard for this championship and it is a great ending to the year to take the number one plate again," stated Team Manager Antti Kallonen. 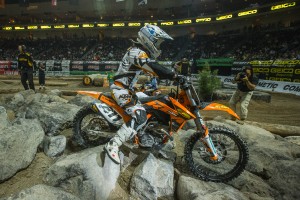 Maria Forsberg and Louise Forsley had a tremendous battle for the lead, with the dreaded rock section playing a deciding role - Photo: Drew Ruiz[/caption]

Factory FMF/KTM rider Maria Forsberg was crowned the 2012 AMA Women's EnduroCross Champion after taking the win in the most exciting race of the season in front of the sold out crowd at The Orleans Arena.

Forsberg was 2nd off the start in the main event but suffered a crash in the tire section on the first lap that dropped her to 5th. It was fellow KTM rider Rachel Gutish who capitalized on the mistake and jumped into the lead. She led for a lap until Forsberg and KTM rider Louise Forsley began to push forward. Both girls were able to pass Gutish at the halfway point and began a tremendous battle for the lead. The crowd was on their feet as both girls were neck and neck heading into the final lap.

The dreaded rock section was an obstacle that the women only had to ride on the final lap and it proved to be the deciding factor in who would win this race. Forsley entered the rock section first but crashed early on. Forsberg came in on the outside and tried to get around Forsley. After struggling on the outside line she moved to an inside line choice that ended up taking her bike straight into Forsley's. The two girls quickly untangled their bikes trying franticly to get going before the other. It was Forsberg who prevailed and climbed out of the rocks, through the fire pit and over the final tire to take the win. Forsley was able to finish 2nd and Gutish finished 3rd to complete a KTM podium sweep.

Forsberg's win at the Las Vegas round secured her the 2012 title. She commented, "It feels so great to get this title. I have had an amazing season. To win an X-Games gold medal, go undefeated in the GNCC series and then come out and win this championship has just been amazing. I couldn't do it without the support of my team, my family and my friends. I want to send a huge thank you out to everyone who helped me this year. It has truly been an incredible year."

Women's EnduroCross Point Standings - ( Round 8 of 8 )

Manufacturer's Cup Points Standings - ( Round 8 of 8 )