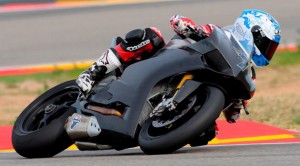 Ducati's World Superbike team has signed a two-year agreement with Team Alstare, a Belgian motorsports organization run by Francis Batta. The two companies will be paired together through the 2014 season, with the announcement coming a few weeks after Ducati split from its previous Superbike partner, Althea Racing.

Alstare's headquarters in Belgium is known as one of the most technologically advanced in racing, according to Cycle News. Though the team's last official partner was Suzuki, it did use Ducati bikes in the mid-1990s with good results.

"At Ducati, we are very happy and confident with this agreement," said Ernesto Marinelli, Ducati Superbike project manager. "The professionalism, passion and sporting character of Francis Batta and all his staff, together with his structure...are vital elements for our future plans. We have a lot of work to do, and I am sure that we are able to do it in the best possible way."

Carlos Checa and Ayrton Badovini will be the two riders for Team Ducati Alstare, with the first testing taking place November 14 and 15 in Spain. The new team is set to test the all new Ducati 1199 Panigale, which has been in the works for some time, and will make its official Superbike debut in 2013.