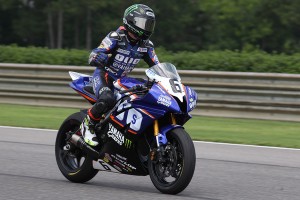 Cameron Beaubier discovered he has reinjured his kneecap and will have to undergo another round of rehabilitation - Photo: Brian J. Nelson[/caption]

Cameron Beaubier discovered he has reinjured his kneecap and will have to undergo another round of rehabilitation, Cycle News reports. The SportBike racer originally had surgery at the end of March to repair his right knee, which was damaged during a one-vehicle street accident.

The 19-year-old racer rushed back to the motorsports scene in order to get back on his Yamaha bike, and had some success upon his return to racing. However, he was involved in a crash at the New Jersey Motorsports Park in September, and afterward felt some soreness in the knee. He continued to race and even won several events after that point, oblivious to the fact that he had broken his kneecap again.

When Beaubier underwent a standard procedure to check on his progress, doctors saw the new damage and had to reconstruct the joint. Now the racer must rehab for a second time.

"I'm not going to rush it at all," Beaubier told the news source. "I'm going to take it super easy and just let it heal. Last time I was trying to get back to race. It's a big bummer."

The rider will have several months to heal, as the next event on his schedule is the Daytona 200 in March.