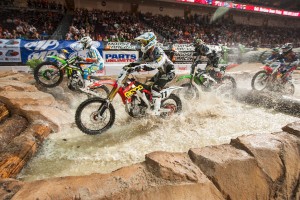 Due to the large number of entries, the final Las Vegas event will be extended an extra day to include races on November 16 and 17 - Photo: Drew Ruiz[/caption]

The season finale for AMA EnduroCross will have a distinctly different look this year, as the motorsports event is set to take place over two days for the first time. Due to the large number of entries for the competition, the Las Vegas event will be extended an extra day to include races on November 16 and 17.

Amateur races and preliminary rounds will take place on Friday, November 16, and riders with strong enough times will be able to qualify for the premier race the following night. A double main event is scheduled for Saturday, with the full purse and points on the line for each race, and the action is expected to remain ramped up throughout the evening.

"The double main event format for the Experts is awesome for the riders and fans," said Lance Bryson, director of sales & marketing for EnduroCross. "The riders who make the mains have a chance to make up for a bad first race, and the fans get to see the best riders compete head to head twice in one night."

Even if fans can't make it to Las Vegas for the season finale, they will be able to watch via a live webcast produced by the circuit. This will be the first time EnduroCross is broadcasted live to the world.