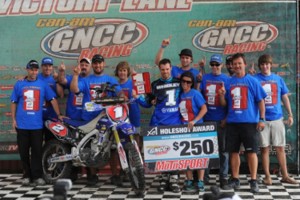 Paul Whibley won the final round of the 2012 Can-Am GNCC Series, clinching the season title in the process.[/caption]

Paul Whibley won the final round of the Can-Am Grand National Cross Country Series, clinching the season title in the process. It was the second career motorsports title for the Yamaha rider, according to Full Noise.

Whibley trailed KTM's Kailub Russell by one point coming into the event in Tennessee. Russell struggled out of the gate, getting tangled with a few other racers and having to battle back from the middle of the field, while Whibley surged ahead and set the pace. The KTM rider eventually maneuvered his way into second place, but it was not enough to overcome the Yamaha rider's early lead, Cycle News reports.

"I just rode my own race today and couldn't ask for the season to end a better way," Whibley told Full Noise. "It's been an awesome year, we've had some huge battles with a lot of the guys and it's been exciting for the fans being this close down to the final round."

Whibley finished just four points ahead of Russell in the final championship standings, with the small margin enough to claim his second title since 2009. Jordan Ashburn took the final podium spot of the day, and Rory Mead was the distant third-place finisher in the season rankings after finishing sixth in Tennessee. 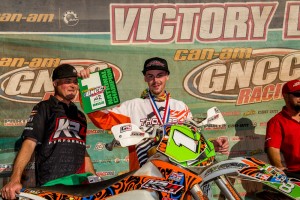 KTM's support rider Jason Thomas was crowned GNCC XC2 Champion at the final round of the 2012 GNCC Series held at Loretta Lynn's Ranch. Despite two injuries, Steward Baylor was able to finish fourth overall in a remarkable ride that placed him second in the championship standings. In the XC1 class, Factory FMF/KTM rider Kailub Russell finished second to earn second overall in the championship points.

Thomas jumped off to a second place start when the flag waved for the start of the XC2 class. He was able to maintain his pace and hold strong in second position throughout the three-hour endurance race. His consistency paid off, and when he crossed the checkered flag, he was crowned the 2012 GNCC XC2 champion! Unfortunately, Baylor didn't have the start he wanted and rounded the first corner in second to last. He made an impressive charge to pass half of the field before the end of the first lap. His injury kept him around mid-pack for the first half of the race as he struggled to get in a rhythm due to the pain. Baylor muscled through to the end of the race and was able to put in a remarkable charge in the final two laps to move into fourth place by the end of the race. Baylor's fourth place result placed him second overall in the point standings.

"Of course I wish I would have won the championship today, but second place feels really good after being plagued with injuries all year," remarked Baylor. "I would really like to thank all my sponsors and my family for all their support this season." 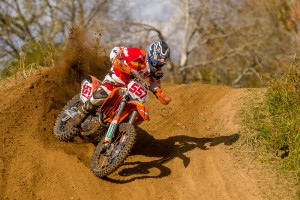 Heading into the final XC1 race Kailub Russell had a one point lead in the series championship over Paul Whibley. Off the start, bad luck struck, and Russell fell in the first turn with another rider. With an impressive charge, Russell was sitting fourth at the conclusion of lap one. Russell continued to press forward moving into third on the second to last lap, trying to close the gap on Whibley. On the final lap Russell continued to increase his pace and was able to pass Jordan Ashburn to take over second place. Russell finished the day second overall and second in the GNCC XC1 Championship. 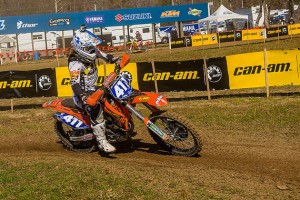 Factory FMF/KTM rider Maria Forsberg earned her thirteenth straight win at the final round of the GNCC Series held at Loretta Lynn's Ranch. Her win at the ranch marked the end to a perfect GNCC season.

Forsberg has already set multiple records this year. Forsberg won gold at Women's EnduroX for the second straight year at the summer X-Games. She then went on to wrap up her GNCC championship the following weekend four rounds early. Later in the season she would become the first female rider to overall the morning class in the GNCC Series. And after thirteen straight wins, she ended her season with a perfect score.

The talented factory rider has set the benchmark again for fellow women racers with the completion of the perfect season. However, her season is not done. Forsberg will head to Las Vegas, NV in mid-November to compete in the final round of the AMA EnduroCross Series where she currently leads the EnduroCross Women's point standings. A top three finish at that event would secure another championship for Forsberg who is well on her way to a perfect year.