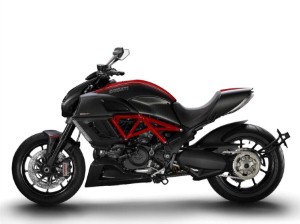 Italian manufacturer Ducati announced that its North American sales have increased for the ninth consecutive quarter. The company reported that the third quarter of 2012 saw a 24 percent increase in sales compared to the same time period in 2011.

"We have paid very close attention to the desires of our customers in North America, and believe that we have successfully developed the most appealing product offering in the brand's history," said Cristiano Silei, CEO of Ducati North America. "With this consistent, positive momentum in retail sales, we are confident that 2012 will finish as a record year for Ducati."

September was an exceptionally strong month, with a 40 percent increase in sales compared to one year ago. Part of that growth can be attributed to the release of the brand's new 1199 Panigale superbike, as well as the new Diavel street bike, which received Cycle World Magazine's "10 Best" award for the second year in a row. Sales for the Diavel went up by 66 percent year-over-year, making it the company's fastest growing product.

With so many new options and more on the horizon for 2013, Ducati anticipates that its sales of bikes and motorcycle accessories, and its North American presence, will continue to grow.