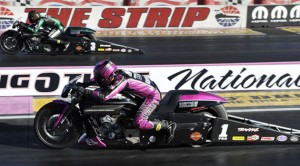 Harley-Davidson Screamin' Eagle/Vance & Hines rider Ed Krawiec won his ninth Pro Stock Motorcycle race of the season, clinching the motorsports championship for the Harley squad. Krawiec's strong performance brought the manufacturers' title back to the team while also putting the rider in a position to win the individual crown.

"What a great weekend for our team," Krawiec said to Ultimate Motorcycling. "There's simply no pressure or stress when I roll up to the line. All I'm thinking about is going to Pomona with a chance to end the season winning four Wallys in a row, which I've never done."

With the manufacturers' title wrapped up, the rider will turn his attention to individual accolades. Krawiec, the defending champion, currently leads the individual points standings with 111 points over the next closest competitor. Only his teammate, Andrew Hines, is still mathematically in championship contention with one round remaining.

In order to clinch the title, Krawiec only has to qualify for the elimination round in the final race, The Spectrum Reports. The championship would be his second consecutive title and the third in five years.

The final showdown will take place on November 11 in Pomona, California.