Carlos Checa Moves To Ducati After Split With Althea 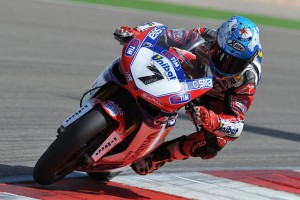 Following the news that Ducati Corse split with its long-time World Superbike partner Althea after the end of the 2012 season, the fate of rider Carlos Checa was up in the air. Rumors were put to rest earlier in the week, however, as Ducati announced that it will be participating in the 2013 superbike series with Checa as its factory racer.

Checa, the 2011 Superbike Champion, will continue helping to develop the new Ducati 1199 Panigale, which is scheduled to make its debut next year. His former teammate, Davide Giugliano, will stay under contract with Althea Racing.

Ducati and Althea Racing had been partners for three years on the motorsports circuit, with the peak coming in 2011 when the companies won the manufacturers' and riders' titles in superstock racing. According to Sport Rider Magazine, the split leaves each company with many questions about their respective futures. Althea Racing provided resources, experience and knowledge for Ducati Corse, which is now left scrambling to find a new partner after announcing the separation relatively late in the year.