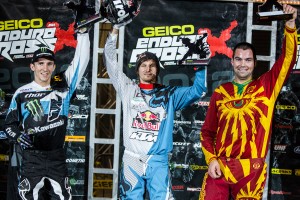 Blazusiak once again got off to a fast start and led the race through most of the second lap, Cycle News reports. During the rock pile section, however, Blazusiak and his KTM teammate Mike Brown found themselves stuck, and Cody Webb capitalized on their struggles to take the lead.

Webb controlled the majority of the race from that point on, but a slip near the end of the moto opened the door for Blazusiak to charge through. He crossed the finish line first, just ahead of Taylor Robert and Bobby Prochnau, who took second and third, respectively.

"It was a very challenging course," Blazusiak told Ultimate Motorcycling. "All in all, it was a pretty fun track to race and I am glad I was able to make the fewest mistakes and hang on for the win."

With the win, Blazusiak put himself in firm command of the AMA standings. Robert's second place finish keeps him in the second position in the overall standings, while Mike Brown remains a distant third.