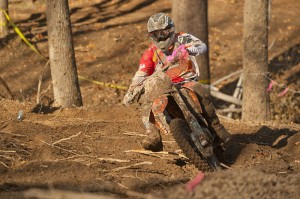 In only his third race since returning from injury, Charlie Mullins claimed the win in the XC1 class at the Ironman GNCC - Photo: Shan Moore[/caption]

In only his third race since returning from injury, Factory FMF/KTM's Charlie Mullins claimed the win in the XC1 class at the Ironman GNCC. His KTM teammate, Steward Baylor, also topped the podium earning the victory in the XC2 class.

In addition to the two KTM's on top of the podium, Factory FMF/KTM rider Kailub Russell earned 3rd overall in the XC1 class to regain the points lead heading to the last round. He now leads by 1 point over Paul Whibley heading to Loretta Lynn's. The points are exactly the same in the XC2 class where Steward Baylor leads by 1 point over fellow KTM rider Jason Thomas. GNCC fans can expect quite a show at the final round as the championship will go down to the wire.

The Ironman GNCC did not start as planned for Mullins or Russell who both found themselves at the back of the pack off the start. Luckily, both riders set straight to work and made multiple passes to move into the top three by the end of the first lap. Unfortunately, bad luck would strike for Russell on the second lap when he crashed in the mud and lost multiple positions. He crossed the finish line mark at the end of lap two in 7th position. Russell spent the remainder of the race fighting his way through the pack. By the end of the seven-lap, three-hour race he was able to put his KTM in podium position to finish 3rd overall.

Mullins remained trouble-free in the front of the pack and managed to lead six laps of the race to take the win by 28 seconds over the 2nd place ride. "It feels great to get back on top of the podium," stated Mullins. "This has been a very up and down season for me, and even though it is the end of the season, it is great to have the bike working well and for everything to be clicking just right." 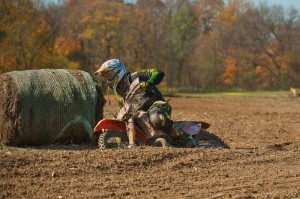 Steward Baylor put together another impressive performance to claim his sixth win of the season - Photo: Shan Moore[/caption]

In the XC2 class, Steward Baylor, fresh off clinching his National Enduro Championship, put together another impressive performance to claim his sixth win of the season. Baylor moved his KTM to the front of the point standings as the riders head to the final round.

Also topping the podium, in her still undefeated season, was Factory FMF/KTM's Maria Forsberg. The already crowned GNCC Women's Champion, claimed her 12th straight victory in the Women's class and finished 3rd overall out of all riders in the morning classes combined. Forsberg's took the win at the Ironman by an impressive 8 minutes over the 2nd place competitor.

"We are very pleased to leave here leading the point standings in both the XC1 and XC2 classes,' remarked Factory FMF/KTM Team Manager Antti Kallonen. "We know the final round will come down to the wire but it is great to have the confidence that we are heading to Loretta's with the points lead in both series."