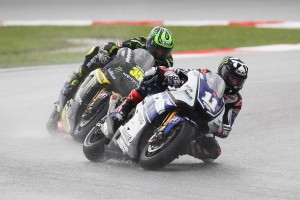 Ben Spies will miss the race at Australia's Phillip Island as he deals with the injuries resulting from a crash in last weekend's Malaysian round.[/caption]

It's been an up and down season for Ben Spies, and now the motorsports rider faces yet another obstacle, as a shoulder injury will keep him from racing in the upcoming round of MotoGP.

Spies will miss the race at Australia's Phillip Island as he deals with the injuries resulting from a crash in last weekend's Malaysian round. The challenging conditions on the wet raceway got the best of the American rider, who fell while attempting to maneuver the flooded Sepang Circuit. While an initial medical check found no serious injuries, later tests showed a cracked rib, bruised lung and enough shoulder damage to potentially require surgery, Cycle News reports.

"I'm lost for words," Spies said. "We've had such a tough season with an unbelievable amount of bad luck... It's disappointing to be heading back to the U.S.A. now instead of to Phillip Island but it's obviously important to get the right treatment as soon as possible."

The Texan will return to his home in the U.S. to undergo further medical evaluations. He is expected to miss anywhere from three to eight weeks, but there is a chance he could return in time for November's race in Valencia.