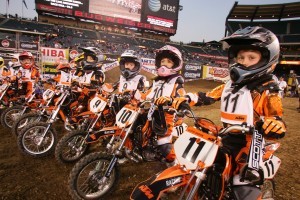 The KJSC will showcase the talent of boys and girls at select Monster Energy AMA Supercross races in 2013.[/caption]

Feld Motor SportsÂ® announced the return of the widely popular KTM Junior Supercross Challenge (KJSC). Following a five-year hiatus, the KJSC will showcase the talent of boys and girls at select Monster Energy AMA Supercross, an FIM World Championship, races in 2013. The KJSC not only gives boys and girls the opportunity to compete on the same track as their heroes, it promotes motorcycling as a family activity.

During race day, KJSC riders will race aboard identically prepared KTM 50 SXS motorcycles and will participate in practice laps at 3:00pm and 5:00pm with a three lap exhibition race taking place during the night program. The young KJSC participants will also be able to participate in the rider track walk and be acknowledged during opening ceremonies. 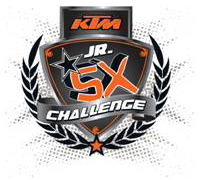 "We are excited to have the KTM Junior Supercross Challenge (KJSC) back as a part of the 2013 Monster Energy Supercross season," Todd Jendro, vice president of two wheel operations, Feld Motor Sports. "The program provides an exciting and entertaining element for our supercross audience, but more importantly, the KJSC provides a great opportunity for the youth of the sport to showcase their talent and gives us a glimpse into the next generation of supercross superstars. The KJSC program has been a springboard for notable factory standouts such as Ryan Dungey, Mike Alessi and Eli Tomac to name a few. We are proud to work with KTM on continuing to promote this positive representation of our sport."

Interested applicants must be 7-8 years old and meet the full requirements listed in the official rules. All rules and online entry forms can be found at the KJSC event website www.ktmjrsx.com. The KJSC is held at 5 of the Monster Energy Supercross races. Any additional inquiries about the KTM Junior Supercross Challenge should be directed to local KTM dealerships.


About KTM
With the 2012 450 Motocross Championship in hand, KTM, a European motorcycle manufacturer specializing in "Ready to Race" on and off road motorcycles, has proven successes in worldwide competition. The 'Ready to Race' philosophy is embodied into the design and function of each KTM. With more than 200 World Championships and counting, the technology, design and performance of KTM continues to race past the competition.