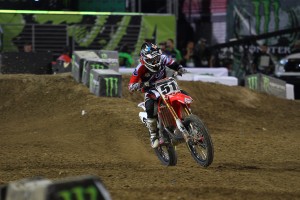 Justin Barcia was the star of the day, taking home the overall win and $100,000 - Photo: Feld Motor Sports[/caption]

No rider took home the $1 million prize for sweeping the three contests at the Monster Energy Cup, but that doesn't mean there wasn't strong performances and dramatic twists. Justin Barcia was the star of the day, taking home the overall win and $100,000.

The second annual motorsports event, which featured three separate motos, was held at the Sam Boyd Stadium in Las Vegas. Defending Energy Cup champion Ryan Villopoto took an early victory in the first contest and looked poised to compete for the million-dollar prize, according to Ultimate Motorcycling. Barcia finished as a close second with 2012 AMA champion Ryan Dungey in third.

Barcia took over in the second moto, however, capitalizing on a crash by Villopoto and shifting gear problems for Dungey. Dungey crossed the finish line in second place despite having to change gears with his hands mid-jump, while Mike Alessi came in third. Villopoto's crash meant that no one would win the million-dollar prize, but it also left the race wide open for the third and final contest.

Eli Tomac excelled during his first race on a 450cc bike, claiming the victory ahead of Barcia and Dungey. The 2-1-2 finishes were enough to give the Honda rider the overall win, while Dungey's 2-3-2 gave him second place on the day. 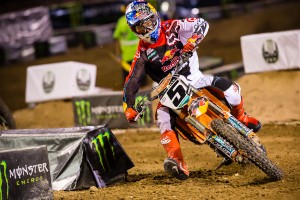 Ryan Dungey overcame multiple hardships to land his KTM on the podium in each main event - Photo: Hoppenworld.com[/caption]

Red Bull KTM Factory rider Ryan Dungey overcame multiple hardships during the three-race format of the Monster Energy Cup to land his KTM on the podium in each main event and come out 2nd overall for the night.

During the early afternoon practice sessions Dungey put himself right where he intended to be by posting the fastest lap in qualifying practice. His fast time earned him first gate pick in the night's opening main event.

The Monster Energy Cup is a unique race in that rider's race three ten-lap main events and combine the scores of all three motos to select the overall winner. What made this year's event stand out further, is a 'joker' section was added where each rider had to take an added section of the track at least one of the ten laps that added a few seconds to their lap time. This helped make the racing tighter and added an extra mental stimulation for the athletes.

In the first main event, Dungey came around the first turn in 2nd behind Josh Grant. Unfortunately, another rider hit a tuff block that then flew into Dungey's lane and broke off his shifter. In an impressive feat, Dungey was actually able to shift the bike into 2nd gear with his hand to allow him to safely navigate the track without losing too much time to the leaders. At the end of ten laps, he managed to pull off a remarkable 3rd place result.

In the second main event, Dungey launched off the split lane start to come out in 2nd place at the holeshot mark. Charging hard behind the leader, Dungey showed he had the speed to battle up front and began to close in on Villopoto. Unfortunately, Dungey clipped a tuff block on the second lap and broke his shifter for a second time. He was again stuck shifting with his hand and lost a few positions to the competitors. Once he was again locked in gear, he found a rhythm and managed to land back on the podium with a 2nd place result to put himself in contention for the overall. 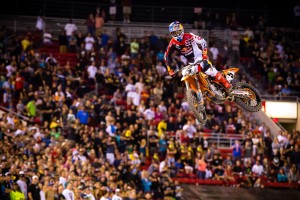 "I feel like my speed is there and my bike is working great," remarked Dungey after the second race - Photo: Hoppenworld.com[/caption]

"I feel like my speed is there and my bike is working great," remarked Dungey after the second race. "I just made a small mistake at the beginning of the race. I am hoping for a clean start in the final moto to work toward a great result and hopefully the overall."

As the gate dropped for the third and final main event Dungey came through the first turn in 2nd place behind Mike Alessi. By the end of the first lap he was able to get around Alessi for the lead. Dungey then began to receive heavy pressure from Justin Barcia. The two riders raced hard battling for the lead position. When Dungey took the joker line on the seventh lap he lost a position to Eli Tomac. With only three laps remaining, Dungey was unable to catch back up to the lead riders and settled for 3rd overall. His combined moto finishes placed him 2nd overall for the night.

"Given the circumstances, we are very pleased with Ryan's ride tonight," commented Red Bull KTM Team Manager Roger DeCoster. "We were very pleased with his bike set-up and his lap times. Unfortunately, he had a few technical difficulties with the shifter but other than that we consider this night a success and are happy for the race experience we received that will help us better prepare for Anaheim 1."