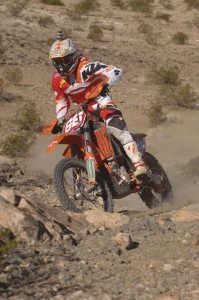 Kurt Caselli won the penultimate round to keep himself in contention for the Hare & Hound championship - Photo: Mark Kariya[/caption]

The title chase is still alive in the 2012 AMA Hare & Hound National Championship, as Kurt Caselli won the penultimate round to keep himself in contention for the championship. He and David Pearson are neck-and-neck in their quest for the motorsports crown.

Caselli won the ninth round of the Hare & Hound Series, finishing with a six minute lead over Pearson. The two competitors were in a dead heat after the first loop of the track, but Caselli continued to gain time on his KTM bike and eventually built up an insurmountable lead. Nick Burson, Justin Morrow and Ivan Ramirez completed the top five.

"I am happy to take the win here," Caselli said. "There was a lot of tough competition here today and I had to work hard to claim the win."

The victory reduced the point differential between Caselli and Pearson from 13 to eight. Pearson can clinch the title with a first or second place finish in the season finale, regardless of where Caselli finishes. According to Cycle News, however, a win by Caselli combined with Pearson coming in at third place or less will give the KTM rider the crown.

The final round will take place at Lucerne, California, on October 28.