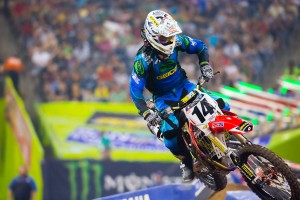 Kevin Windham is returning to racing for the Monster Energy Cup, his first since suffering an injury at the Houston Supercross - Photo: Frank Hoppen[/caption]

GEICO Honda racer Kevin Windham is returning to motorsports this weekend at Las Vegas' Monster Energy Cup. Windham has been sidelined for six months since suffering an injury at the Houston Supercross.

The second annual Monster Energy Cup will feature a star-studded field of riders, including defending Energy Cup champion Ryan Villopoto and titleholders like Ryan Dungey, Justin Barcia and Eli Tomac. All will be competing for the coveted $1 million prize, but the race will hold a special significance for Windham as he looks to return to top form.

"I haven't raced since Houston Supercross, which was back in April," said Windham in a team release. "Things are good right now. My body is strong. I've been doing a lot of preparation and I came out to California and rode the 2013 Honda for the first time. I had an amazing day of testing and I'm looking forward heading into Monster Energy Cup on that new bike."

With many obstacles located around the indoor track, all riders will have to be alert as they make their way around the raceway. The prize money, combined with a what is expected to be heavy crowds and an electric atmosphere, should make for an exciting event.