Dani Pedrosa Leads Testing After Day One In Malaysia 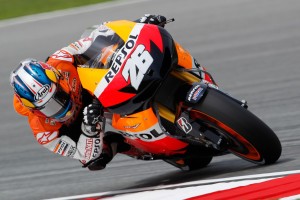 Dani Pedrosa once again led the pack in practice sessions for MotoGP at the Sepang International Circuit in Malaysia.[/caption]

Dani Pedrosa once again led the pack in practice sessions for MotoGP at the Sepang International Circuit in Malaysia. The Spanish rider is coming off four wins in the past five races as he continues his quest for the championship.

He'll have to battle current points leader Jorge Lorenzo for the top spot, as well as his own Honda teammate Casey Stoner. Stoner returned to the circuit last weekend in Japan after missing several weeks with an injury and is looking to rebound with a strong performance. He finished just behind Pedrosa in the testing.

"It's two seasons since I raced in Sepang and I'm looking forward to it now," said Pedrosa. "I'm really enjoying racing at the moment and I want to continue like this, pushing the maximum from our side without thinking about the others."

All competitors will have to battle difficult weather conditions, as the Malaysian track saw heavy rains occur during testing, reports Ultimate Motorcycling. If the weather holds, riders will face tough decisions about what type of tires to use and how to manage the race.

Pedrosa currently trails Lorenzo by 28 points in the standings with three rounds remaining, including this weekend's motorsports event.