Classic BMW Bikes Up For Auction 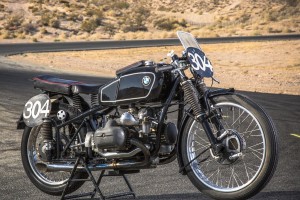 A unique collection of BMW motorcycles will be up for auction at Bonhams' Las Vegas Motorcycle Sale in January, headlined by a rare 1939 Kompressor RS 255.[/caption]

A unique collection of BMW motorcycles will be up for auction at Bonhams' Las Vegas Motorcycle Sale in January.

The group of four is headlined by a rare 1939 Kompressor RS 255, which is the same model used by iconic motorsports racer John Surtees. The rider described the bike as being among the top machines to ever race in a motorcycle grand prix, with an authentic 1930s engine mounted on a 1951 frame - something that was common in the early days of factory racing.

"Competition BMWs, particularly those from before and just after WWII, are increasingly gaining interest from discerning collectors," said Nick Smith, head of Bonhams USA. "They were highly advanced, extremely well-made, and successful, and this combination of attributes makes them tremendously desirable."

This will be the third annual motorcycle sale for Bonhams. In addition to classic bikes, the auction features memorabilia, motorcycle gear and accessories.