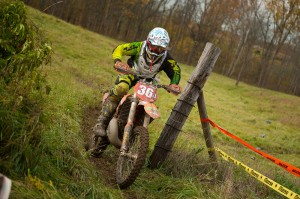 Steward Baylor clinched the 2012 AMA Rekluse National Enduro championship with one round remaining after a dominant performance on his KTM 250 XC last weekend. The KTM rider was crowned after winning his sixth motorsports event of the season at the Muddobbers Enduro in Matthews, Indiana.

Coming into the race, Baylor only needed to finish ahead of rival and eight-time champion Mike Lafferty to win the title, reports Cycle News. He did that handily, building up a 39 second lead and cruising through the finish line first to secure the victory. He was followed by Nick Fahringer and Lafferty, who finished second and third, respectively, while his KTM teammates Rory Mead and Jesse Groemm rounded out the top five.

"It feels great to have all of the hard work finally pay off," Baylor told Ultimate Motorcycling. "It has been a tough season and I am very happy to win my first championship and very thankful to my family and my team for all of their hard work."

This is Baylor's first AMA Enduro championship, but he has a chance to claim another title before the year ends. He will be competing in the next GNCC event in hopes of nabbing the XC2 class championship.