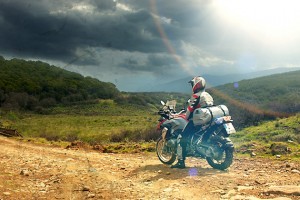 BMW is celebrating the launch of its new R1200GS with an unusual trek that brings its global fans together. With a contest titled "One World, One GS," the German maker of bikes and motorcycle gear is allowing a few fans from around the world to be the first people to gather their adventure gear and take the R1200GS for a spin through some unique places.

BMW will select five individuals to ride a leg of an international tour on the new GS model. Anyone with a motorcycle license and passport is welcome to participate in the contest and try to be one of the first people in the world to try the new GS. Judges will be announced at the 2012 EICMA motorcycle show in Milan next month, and that panel will select five lucky winners from the applicants.

According to Ultimate Motorcycling, the BMW GS is a bike that has long been used for on and off-road driving. The sturdy machine has technological capabilities and a superior engine capable of reaching even the most remote corners of the world, which is exactly what the manufacturer intends to do with its newest contest.

The 2013 BMW GS will make appearances on five continents, traversing the terrain in different countries. Chosen locations include Laos in Asia, South Africa and Botswana in Africa, New Zealand, the Southwest portion of the United States and a European trip from Madrid, Spain, to BMW's headquarters in Munich, Germany.