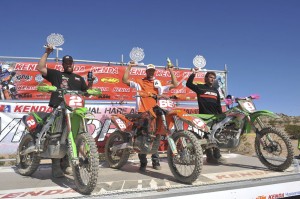 Factory FMF/KTM rider Kurt Caselli took the win at the 9th round of the AMA Kenda National Hare & Hound Series by 6 minutes over the next closest competitor to help close the gap in the overall championship point standings.

Caselli took the holeshot and the early lead as he embarked on the first of three technical loops. Caselli had heavy pressure from rival David Pearson during the first loop with both riders coming into the first gas stop wheel to wheel. On the second gas stop Caselli had put 1 minute on Pearson and by the finish his lead had grown to over 6 minutes.

"I am happy to take the win here," remarked Caselli. "There was a lot of tough competition here today and I had to work hard to claim the win."

While Caselli was out front, his Factory FMF/KTM teammates Ivan Ramirez and Mike Brown struggled to find their way after high winds had blown some of the trail markers from the course. Ramirez got lost while running in 5th place and was able to find the 3rd and 4th place riders and find his way back to finish the event in 5th place. Brown got lost on the first loop and dropped back to 15th place. He found his way on the second loop and climbed up as high as 8th before withdrawing from the competition with a mechanical issue. The fourth member of the Factory FMF/KTM Team, Quinn Cody, was running as high as 9th early in the race before his injured wrist began bothering him and the team decided to play it safe and pull him from the competition.

"It was great to see Caselli and Ramirez perform well today," commented Factory FMF/KTM Team Manager Antti Kallonen. "Unfortunately, we had some bad luck with Brown and Cody but it was still a good experience for both riders and we were able to use the time to help dial in some settings for their Baja bikes. All in all, it was a very successful weekend for KTM."