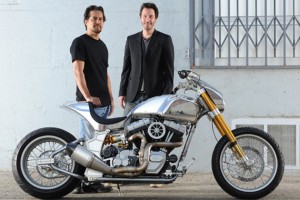 Keanu Reeves is teaming up with Gard Hollinger of L.A. County Choprods to launch the Arch KR GT-1.[/caption]

Actor Keanu Reeves is teaming up with Gard Hollinger of L.A. County Choprods to launch the Arch Motorcycle Company. Production of the signature bike, the Arch KR GT-1, is expected to begin in 2013.

The two motorcycle enthusiasts met several years ago when Reeves came to Hollinger with a customization project. After working on the bike for five years and forming a friendship, the duo decided to mass produce their model. The motorcycle parts for the bike will be provided by a variety of suppliers, including Bennett's Performance, Yoshimura RD and Ohlins, reports Motorcycle.com.

"We have a common vision," Gard said of his partnership with Reeves. "We started with the idea of a performance-based modern machine. Once the bike was complete, it looked like a production motorcycle but unlike anything we had ever seen. It's unique and we can't wait to introduce it to the world."

According to Ultimate Motorcycling, the bike will be characterized by power, stability and aesthetic beauty.

Reeves has been an avid motorcycle fan since he purchased his first bike more than 25 years ago. He admits that he is a daily rider of the two-wheeled machine and eventually found himself willing to share his passion with the world.