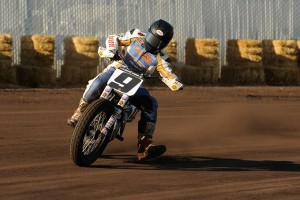 Jared Mees only finished eighth at the Pomona Half Mile, but that was more than enough to earn him the championship title - Photo: Dave Hoenig[/caption]

Jared Mees only finished eighth at the Pomona Half Mile, but that was more than enough to earn him the motorsports title. A strong race at the Los Angeles County Fairplex helped Mees claim the AMA Grand National Champion title by 13 points.

Kenny Coolbeth Jr. took the top spot, followed by Brad Baker and Bryan Smith. No one even came close to Coolbeth, however, as the Harley-Davidson rider was largely uncontested throughout the race and took the victory by more than eight seconds.

"The feeling hasn't really sunk in yet," said Mees. "So much hard work and dedication has gone into this season and it all paid off. I kind of knew where I was at the whole way and was able to bring it home. I really have to thank my team and sponsors for all of their support this year; this was a great team effort."

Mees' main competitors for the title, Sammy Halbert and Jake Johnson, finished 13th and 14th, respectively. Halbert suffered from a clutch problem during the race, forcing him to slow his pace, while Johnson looked sluggish at the start and never recovered. With the only threats to the title far behind, Mees was able to run a safe race and do just enough to take home the crown.