John Hopkins To Sit Out A Year 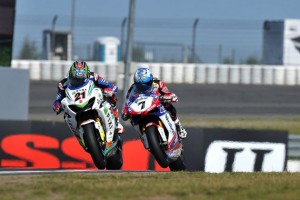 Suzuki announced that its World Superbike racer John Hopkins will sit out the 2013 season in order to fully recover from several serious injuries.[/caption]

Suzuki announced that its World Superbike racer John Hopkins will sit out the 2013 motorsports season in order to fully recover from several serious injuries.

Hopkins has been suffering from injuries throughout 2012, culminating in a withdrawal from a series event in France last weekend. Previously in the year he opted to have a portion of a finger amputated so he could get back to racing, but later broke that same hand, leading to six surgeries in the span of four months. After battling back to return to racing, he had a severe crash on the Italian track in Monza and injured his hip.

"I have really struggled with my hip since the crash at Monza and I know that it is a priority to get my health sorted before I can even think about racing again," Hopkins said. "I didn't want to pledge myself to the FIXI Crescent Suzuki team for 2013 and then not be able to give 100 percent because the injury is a constant worry, so although this is a difficult decision it is the correct one."

The 29-year-old American has already undergone 29 surgical procedures in his career. After finishing fourth overall in the MotoGP standings in 2007 it was revealed that Hopkins had the skill to be one of the world's top racers, but injuries have gotten the best of him. He will look to return in 2014 as a completely healthy and prepared competitor