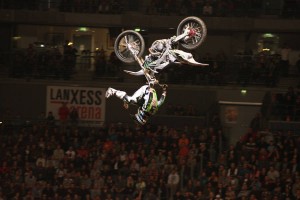 Remi Bizouard entered the competition as the top qualifier and then dominated on the scorecards.[/caption]

While some of the newest bikes and gear were being revealed at the Intermot International Motorcycle Show in Cologne, Germany, the nearby LANXESS Arena was hosting the tenth round of the FIM Freestyle MX.

According to Ultimate Motorcycling, more than 12,000 fans turned out to watch the motorsports event, with most on hand to cheer on German competitors Fabian Bauersachs, Hannes Ackermann and Kai Haase.

It was a French rider who stole the show, however, as Remi Bizouard entered the competition as the top qualifier and then dominated on the scorecards. He earned 407 points from the judges and was the only rider to even reach the 400-point mark. Bizouard edged Czech rider and 2010 champion Libor Podmol for the victory after he successfully completed several tricks, including the "Hart Attack" Backflip, Cliffhanger Flip and a 360.

Bizouard has won six of the 10 events so far this season. His success has landed him on top of the world championship rankings, with Podmol 20 points behind in second place. If Bizouard has similar results at the October 27 freestyle competition in Latvia, he should be able to clinch the championship title.