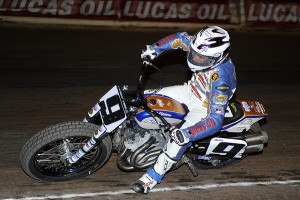 This weekend's Pomona Half Mile should be one of the biggest races of the year as riders fight for the top spot with Jared Mees leading the pack - Photo: Dave Hoenig[/caption]

As the AMA flat track season winds down, the battle for points is reaching its boiling point. This weekend's Pomona Half Mile should be one of the biggest races of the year as riders fight for the top spot.

Jared Mees leads the pack heading into the motorsports event, holding a 12-point lead over Sammy Halbert. The Harley-Davidson racer has landed a spot on the podium in nine events this year, while Halbert has scored a series-high four wins and has four additional podium finishes. The two are planning to duke it out for the top spot in Pomona.

"I really like racing at Pomona," said Halbert. "It is a very challenging track and those are definitely the kind I enjoy. I really think I have a good shot at dominating this time out. I took a third last year and hopefully I can better that and bring home the win."

Mees has an opportunity to clinch the AMA Championship with a win, and he will be doing everything in his power to nab the title. He'll have some other racers to contend with, though, as third place competitor Jake Johnson seeks to become a three-time AMA champion. Kawasaki rider Bryan Smith is a surprise entrant into this event, as the factory added the event earlier in the week to help Smith win the Twins Series Championship.