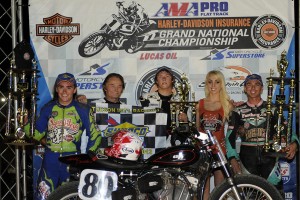 Steve Bonsey stole the show at the AMA Pro Grand National Championship in Arizona. The Tucson Half Mile took place under the lights on the night of October 6, with Bonsey recording his best performance of the season at the Tucson International Raceway.

The motorsports event was the penultimate round of the AMA Grand National Championship, and it was the first time the sport held an event in Tucson in five years.

"I came out and did it in front of the Arizona fans here tonight," said Bonsey. "My first victory was in California and luckily my second one came here in front of you guys. From start to finish, I felt good the whole race and I have to thank my guys for giving me this great opportunity."

The 2012 season will close out in Pomona, California, on October 13. Jared Mees is currently sitting on top of the points standings, but Halbert's third place finish helped to close the gap. Mees' lead is down to 12 points, according to Cycle News.