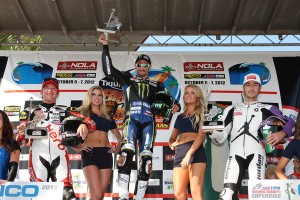 Josh Hayes ended his AMA SuperBike season in style at the Big Kahuna New Orleans, sweeping both motos to take home a record-setting 16th win of the year.[/caption]

Josh Hayes ended his AMA SuperBike season in style at the Big Kahuna New Orleans, sweeping both motos to take home a record-setting 16th win of the year. Hayes' dominance was a fitting end to a motorsports season that saw him go practically unchallenged in many races, wrapping up the title chase weeks before the 2012 finale.

Hayes jumped out to an early lead in the second race in New Orleans and continued to build on it, eventually crossing the finish line almost 10 seconds ahead of the closest competitor and completing his championship season in emphatic fashion.

"It was the perfect way to end an incredible year," Hayes told SportsNOLA. "A lot of fans and friends came out and I'm glad I was able to do a good job in front of them. I think we are showoffs and we tend to do some of our best work when people are around. It was just an awesome weekend - I had a lot of fun."

According to Cycle News, the win gave Hayes 580 points on the year, nearly 150 ahead of second-place finisher Blake Young. Roger Hayden was third.

SportsNOLA reports that Hayes also set records for most consecutive wins and most AMA SuperBike titles. His 33 career victories move him into second place on the all-time wins list.