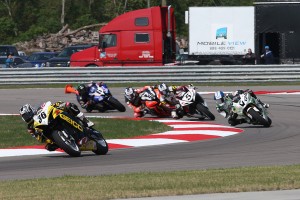 Martin Cardenas edged out rival Cameron Beaubier by two-tenths of a second in the last race at the NOLA Motorsports Park in New Orleans.[/caption]

The final race of the 2012 motorsports season featured an exciting battle between two of the top AMA Pro Daytona SportBike riders.

Martin Cardenas edged out rival Cameron Beaubier by two-tenths of a second in the last race at the NOLA Motorsports Park in New Orleans. The win came a day after Cardenas crashed out of the first moto, leaving the door open for Beaubier to win. Beaubier's victory tied him and Cardenas with seven wins apiece on the season heading into the final moto.

"For sure I wanted to beat Cameron," Cardenas said to Ultimate Motorcycling. "Lately, he was winning a lot. I was prepared to give everything. If it worked out? Fine. If not? The ground was also okay. I gave everything I had."

According to Cycle News, Cardenas held off Beaubier's challenge by blocking pass attempts in the second half of the race. The Colombian's win emphatically ended a season by claiming his second Daytona SuperBike championship.

The battle for the last podium spot was equally as entertaining, with Tommy Aquino and Dane Westby trading leads throughout the final lap. Eventually Aquino pulled ahead and finished less than two-tenths of a second in front of Westby.