World Superbike Title Chase Comes Down To The Wire 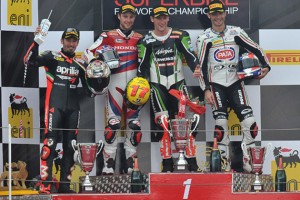 The World Superbike Championship was decided by the slimmest margin ever, as Max Biaggi beat Tom Sykes by half a point - Photo: Fabrizio Porrozzi[/caption]

The World Superbike Championship was decided by the slimmest margin ever this weekend, as Max Biaggi beat Tom Sykes by half a point after a suspenseful day at Magny-Cours.

Biaggi fell on the second lap of the first race, probably due to wet conditions on the French track. While he was unable to finish the race, his main competitors, Marco Melandri and Tom Sykes, finished second and third, respectively. Sylvian Guintoli had the top time to take the win.

With the pressure on all riders in the second moto, Sykes jumped out to an early lead and never looked back. He crossed the finish line less than two seconds ahead of Jonathan Rea to claim the victory.

Sykes' strong performances were not enough, however, as Biaggi's fifth place finish in the second race helped him earn just enough points to stay on top of the motorsports standings. After all was said and done, the Italian had a half-point advantage and won the crown.

"This is the fourth world championship out of six that I have won at the final race, I seem to like difficult challenges," Biaggi said. "The 2012 season went right down to the wire: we started well with a win at Phillip Island after totally renewing my team and we also had some difficult moments. We had to work hard to win the title, and maybe for this reason it's even better."