I recently put a lot of work into my ATV, but when Yamaha announced the Tactical Black Special Edition Grizzly and Rhino 700s, I wished I hadn't. These two machines not only have tough names, but their overall design is really exceptional. The Grizzly 4x4 looks almost frightening, and for a side-by-side, the Rhino manages to have a fierce exterior that's hard to find on a two-seater UTV. Perhaps it's because each machine is decked out entirely in Tactical Black, but they are just very cool looking rides, and Yamaha did one better by making them fun and easy to drive. 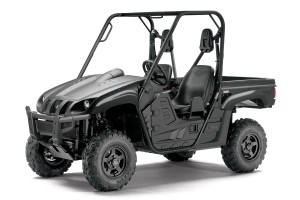 The Rhino manages to have a fierce exterior that's hard to find on a two-seater UTV.[/caption]

Side-by-sides are built with fun in mind, since there's room for you, a buddy and loads of gear - and in my case, that means snacks. The dump bed has plenty of room for a cooler as well as anything else you'd need for an all-day excursion - it can take up to 400 pounds of equipment. So, you can bring everything you need, but that only matters if you can actually get where you want to go. With a 686cc four-stroke engine, this lightweight UTV is built for performance. The automatic transmission even has a reverse gear if you find yourself at an impass. If you really want to diverge from the Tactical Black color, Yamaha also offers the Rhino in Red, Hunter Green and Realtree AP HD Camo. 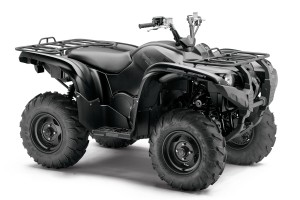 If you prefer to ride solo, the Grizzly is your best bet.[/caption]

If you prefer to ride solo, the Grizzly is your best bet. This ATV has the same engine as the Rhino, but with less passenger and cargo weight, you're going to feel a lot more of that power. Yamaha equipped it with electric power steering, so you have one less thing to worry about while you're behind the wheel of this bear of a bike. It's also got a fully independent suspension and a three-position On-Command In/Out four-wheel drive (4WD), so you can switch between 2WD, limited-slip 4WD and fully-locked differential 4WD to tackle pretty much any terrain you encounter.

Both of these models are touted as being the best in off-road durability, but there's always room for customization if you are so inclined to install any motorcycle accessories to enhance your ride.