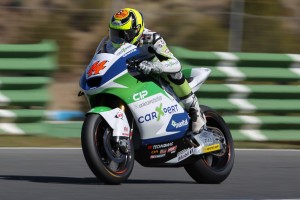 With only a few rounds remaining in the 2012 MotoGP circuit, some out-of-contention teams are switching up their rider lineups.

According to MotoMatters, Roberto Rolfo is replacing Mattia Pasini on the Speed Master team. The veteran Italian rider has spent most of the season in Moto2, where he has failed to score a point in any of his races. Pasini had gained points on four occasions for Speed Master and was putting up solid qualifying times. Nonetheless, Rolfo will get a chance to make an impression on the MotoGP circuit to close out 2012.

"I'm really happy there was a chance to reach this agreement with Speed Master Team, as I'll be taking part in the last four races of the season in the circuits of Motegi, Sepang, Phillip Island and, eventually, Valencia" Rolfo told Crash.net. "It'll be awesome to be back on top of a bike with such horsepower and to do it on the tracks that are among my favorite ones."

The addition of a few new riders will not change the motorsports standings, as the top racers in MotoGP are leaving little room for outsiders in the rankings. Dani Pedrosa and Jorge Lorenzo are still considered the favorites and will not likely be challenged by Rolfo.