USA To Host Three Rounds Of MotoGP In 2013 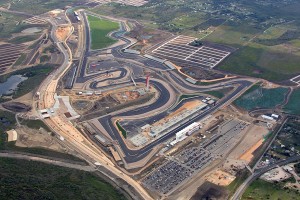 Circuit of the Americas in Austin, Texas, announced that it would host a round of the MotoGP World Championship in 2013.[/caption]

Circuit of the Americas in Austin, Texas, announced that it would host a round of the MotoGP World Championship in 2013. The three-day series will take place from April 19 to 21.

According to Cycle News, the Austin circuit will be the third round of the motorsports championship to be hosted on American soil. The other U.S. locations are the Mazda Raceway Laguna Seca in California and the Indianapolis Motor Speedway in Indiana.

MotoGP is considered to be one of the premier racing championships in the motorcycle world, with 18 races spanning 13 countries in each season. Some of the top riders are Americans, including Ben Spies and Nicky Hayden, and the additional race combined with the prospect of strong finishes from those native racers may help to boost the popularity of MotoGP in the States.

"We are excited to be working with Circuit of The Americas to expand our programming in the United States and bring our series to an exceptional new Grand Prix facility in Texas," said Carmelo Ezpeleta, CEO of Dorna sports, which holds the rights to MotoGP. "We see tremendous opportunities to market MotoGP and grow its fan base through this agreement, and know Circuit of The Americas is the right promoter to help us achieve that goal."