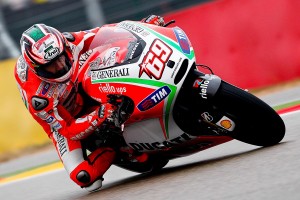 Nicky Hayden suffered a scary crash during the Aragon GP this past weekend, he will be healthy enough to return for the next MotoGP round.[/caption]

Ducati rider Nicky Hayden suffered a scary crash during the Aragon GP this past weekend, but after taking some time to recover the rider will be healthy enough to return to the motorsports circuit in time for the next MotoGP round.

Hayden crashed his front tire into a wall and flew off of the bike. He was immediately taken to a nearby hospital for observation and precautionary tests, the results of which were positive. This injury scare comes less than a month after Hayden missed the Czech Grand Prix in Brno due to a separate injury.

"I came up on that wall really fast," Hayden said. "I thought I might hit it head first if I jumped off, so I let go right before impact. I'm sorry to tear up the bike, but I'm thankful for great safety equipment and to be okay."

Although he has experienced a season filled with ups and downs, Hayden recently signed an extension with Ducati, guaranteeing his position on the team through 2013. The next time he will be racing for the manufacturer is the Japanese MotoGP, set to take place from October 12 to 14 in Motegi, Japan.