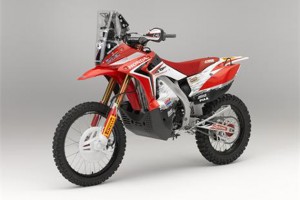 The 2013 Honda CRF450 Rally model will compete in the motorcycle class in the 2013 Dakar Rally to be held next January.[/caption]

Honda has unveiled its CRF450 Rally model at the 2012 International Motorcycle, Scooter and Bike Fair in Cologne, Germany. The new machine will compete in the motorcycle class in the 2013 Dakar Rally to be held next January.

The CRF450 Rally, based on Honda's commercial CRF450X enduro racing model, is fitted with Honda's Programmed Fuel Injection (PGM-FI*) electronic fuel injection system to ensure fuel efficiency and durability. Honda will be aiming for its first rally victory with a model based on a production machine.

From 1981, Honda competed nine times in the forerunner of the current Dakar Rally, the Paris-Dakar Rally. Cyril Neveu from France rode Honda to its first victory in 1982 in the race's fourth year and, from 1986 to 1989, Honda won four consecutive titles for an overall record of five victories in nine years.

Honda will compete in the forthcoming Dakar Rally, the world's toughest race, with the aim of putting the fuel efficiency and endurance technology developed for its commercial vehicles to new challenges and, in turn, use the technology acquired from the race in commercial applications.

The CRF450 Rally model currently under development has already undergone testing in Japan and will be ridden in its first race at the Morocco Rally 2012 from 14 October. The five riders set to compete in the Dakar Rally will ride the Morocco Rally mainly to gather data, identify any problems with the machine under race conditions, and pinpoint any operational issues.

"My participation in the DAKAR rally over the past few years has been an amazing experience. I have been working very hard to bring the enthusiasm and attention of the USA to this prestigious global event. I am excited to be part of Honda's official DAKAR race team and committed to it's success. My role will be to provide consultant, development, rider and mechanical services as needed to the project. Our first race will be a shakedown for the team and bike at the Morocco Rally, beginning in just a few short weeks."